METabolic EXplorer secures financing for deployment of its strategy

Activity in the first half of the year

Clermont-Ferrand, 30 September 2022 – (FR0004177046 METEX), METEX, a leader in industrial fermentation for the production of natural ingredients used in the animal nutrition, cosmetics and biopolymer markets, published its consolidated results for the first half of 2022 today.

As mentioned, in Q2, the Group faced a scissors effect caused by:

In the animal nutrition market, the Group succeeded in containing the fall in its half-year revenue, down 8% compared to the first half of the previous financial year on a like-for-like basis**, while the volumes sold fell by 26% over the same period.

Over the period, the production level of its Amiens plant was maintained in order to build up stocks at controlled production costs. At the end of June, the Group had sufficient stock to meet its customer commitments in the second half of the year while better protecting its margins.

From a financial perspective, this situation has depleted the Group’s cash due to the sharp increase in stock levels and inflation in the cost of certain raw materials. In order to limit the enduring impact of the economic and health situation on the Group’s cash, new adaptation measures for the Amiens production plant were implemented in September and could be reinforced as from the beginning of October.

At the same time, METEX has strengthened the positioning of higher value-added solutions to meet the challenges of the animal nutrition sector in terms of lowering the carbon footprint of animal feed and reducing the use of therapeutic antibiotics and zinc oxide in livestock. The award recently given to the INNEUS® and NOOVALIFE TM ranges by the jury of the SPACE 2022 international trade fair coincides with a policy of higher sales prices as from Q1 2023.

In the cosmetics and consumer care markets, the 30% increase in the revenue of METEX NØØVISTA between Q1 and Q2 2022 is in line with the ramp-up plan of the Carling plant. At the end of June, the unit had reached 60% of its nominal capacity. METEX NØØVISTA increased its prices in May to pass on the higher cost of its main raw material, affected by the Ukraine crisis. Regarding this matter, the Group would like to point out that METEX NØØVISTA has advantageous gas and electricity hedging mechanisms until the end of 2023. The second half of the year should see growth in cosmetics volumes, with more limited visibility for specialty chemical applications and lower costs for its agricultural raw material.

Despite the sharp drop in the volumes sold in animal nutrition in Q2, tight control of the cost structure enabled METEX NØØVISTAGO to break even on an EBITDA basis. METEX NØØVISTAGO’s EBITDA was mainly affected by a drop in the sale of the volume of amino acids produced in Amiens for animal nutrition in Q2 (-11.5% compared to Q1) and, to a lesser extent, by the increase in the price of certain raw materials correlated with the inflation of energy costs borne by the Group’s suppliers and impacting the company.

For the other two entities, EBITDA for the first half of the year is fully in line with the Group’s forecasts.

Other non-current income and expenses amounted to -€0.5 m compared to €87 m in the first half of 2021. As a reminder, the METEX NØØVISTAGO acquisition resulted in badwill of €88 m (estimate of badwill as of June 30, 2021, pending the final allocation of the price) after the revaluation of balance sheet items at their fair value (Purchase Price Allocation, PPA). This amount corresponded to the difference between the net asset value of METEX NØØVISTAGO revalued under the PPA (€101 m) and the purchase price of €13.2 m actually paid by METEX. 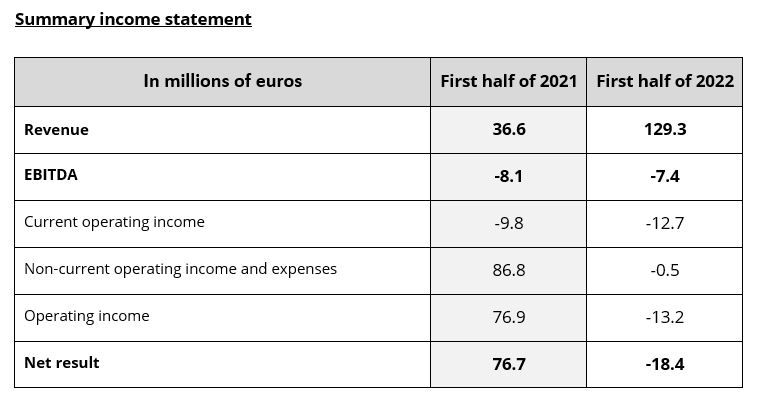 As mentioned, METEX NØØVISTAGO’s stocks increased significantly from €49.8 m at 31 December 2021 to €86.3 m at 30 June 2022. This increase in the value of stock is mainly due to a drop in the sale of the volume of amino acids produced in Amiens in Q2 and, to a lesser extent, the increase in the price of raw materials linked to the cost of energy borne by the Group’s suppliers which do not benefit from the same hedging mechanisms as METEX.

As mentioned, in the second half of the year, the Group’s priority is to reconstitute part of its cash by selling stock.

Outlook: continuation of the value strategy in a context offering little visibility

In a global context that remains demanding and constrained, METEX still wishes to defend its cash position and results. In this regard, the Group remains attentive to the increase in energy costs as well as to the difficulties in procuring certain raw materials which are currently affecting all players in the animal nutrition sector.

As mentioned, an increase in the sales prices of its entire product portfolio has already been implemented. It is expected to boost the sales of its subsidiary METEX NØØVISTAGO from Q1 2023. In this respect, the Group’s commitment to position its entire range on low-carbon benefits should help customers – all of whom are attentive to European goals concerning new performance standards – accept this new policy.

The 2022 half-year financial report – including the half-year activity report, which contains, in particular, a description of the main risks and uncertainties for the remaining six months of the financial year – is available to the public today. It can be downloaded from the Company’s website (www.metabolic-explorer.fr) under the Investor / Annual and financial reports / Company presentations tab.

*EBITDA: Operating income minus the amortization and depreciation of assets, costs of payment in shares, transaction and badwill costs, and write-back of impaired R&D costs

**Equity as of December 31, 2021 takes into account the final revision of the balance sheet values ​​of the allocation of the acquisition price of METEX NØØVISTAGO. 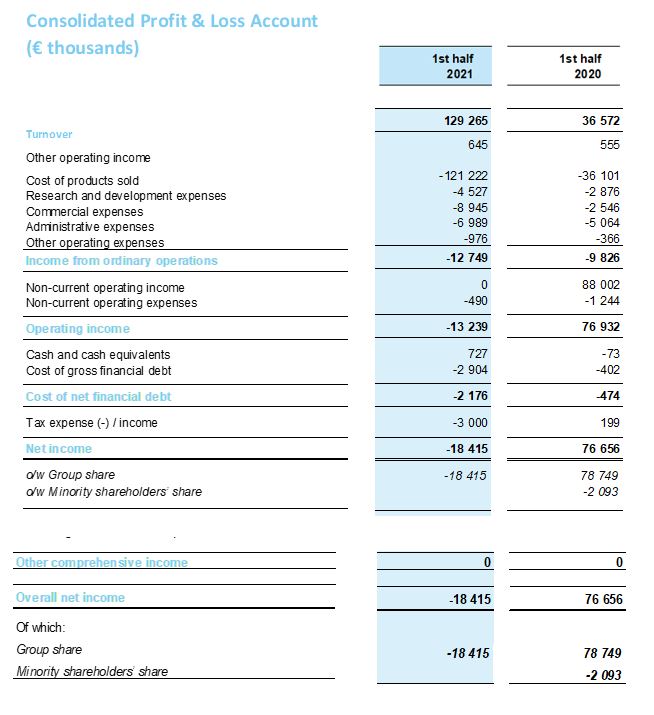 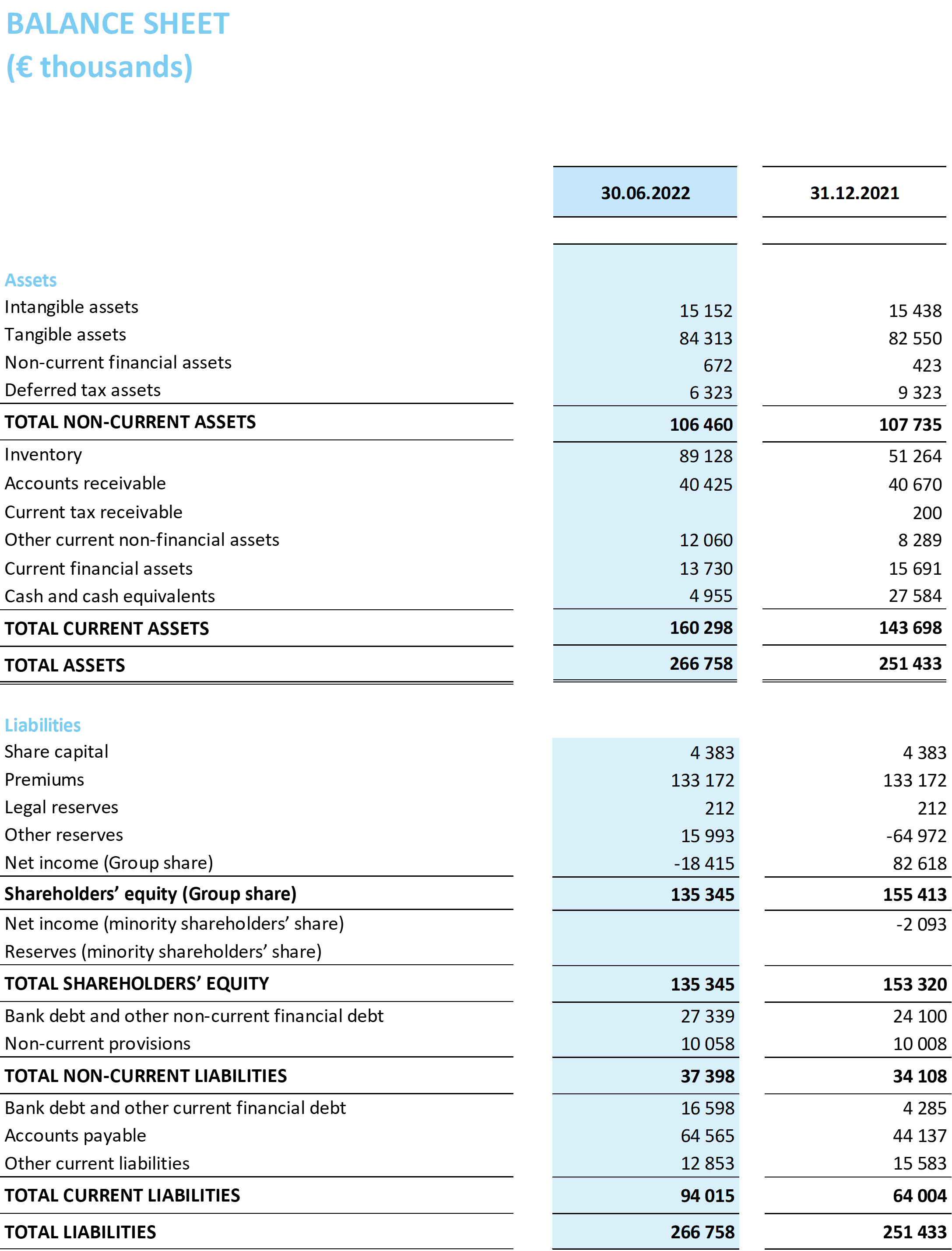 Based at the Clermont Limagne technology park, near Clermont-Ferrand, METabolic EXplorer is listed on Euronext in Paris (Compartment B, METEX) and is included in the CAC Small Index.