Implementation of a production stabilization plan for the METEX NØØVISTA plant in Carling: Next PDO expedition at mid-November

The Group expands with the integration of METEX NØØVISTAGO

Clermont-Ferrand, 30 September 2021 – (FR0004177046 METEX), METabolic EXplorer (METEX), a company contributing to the ecological transition through innovations for the production by fermentation of functional ingredients of natural origin for the animal nutrition, cosmetics, and biopolymers markets, publishes its consolidated financial results for the 1st half of 2021[1].

Highlighting the Group’s activities during the first half of 2021 were the acquisition and integration of METEX NØØVISTAGO (formerly Ajinomoto Animal Nutrition Europe (AANE)) and the start-up of the METEX NØØVISTA plant. The information contained in this press release takes into account the respective contributions of its two operating subsidiaries, METEX NØØVISTA and METEX NØØVISTAGO, which are now fully owned and integrated. The latter entity, previously named Ajinomoto Animal Nutrition Europe (AANE), has been consolidated company in the Group only since the end of April and thus contributes to only two months of the Group’s half-year financial performance. METEX’s financial profile will benefit automatically and over the long term from these developments in the construction of a leader in the European biotechnology industry.

Excellent commercial performance by all the Group’s products

Following the successful industrial scale-up of the PDO/AB technology at the METEX NØØVISTA plant and the start of industrial-scale production of PDO for industrial and cosmetics applications, the Group recorded the first sales from its Carling Saint-Avold plant during Q2 2021, thus meeting its objective. These were sales of industrial grade PDO (bio-based polymers for the production of athletic shoe soles) and cosmetics grade PDO to supply TILAMAR® PDO with NØØVISTA™ to the customers of our strategic partner DSM.

At METEX NØØVISTAGO, the commercial performance of all amino acids in terms of volumes and sales was excellent. Despite the impact of the hydrochloric acid leak in late May, sales for the half were up sharply, compared with the first half of 2020. As of 30 June 2021, pro forma half-year turnover of METEX NØØVISTAGO was €136.6 million, compared with €99.8 million in 2020, representing 36.8% growth in sales.

As previously noted, METEX NØØVISTAGO has been a consolidated company of the Group only since the end of April. Thus, of the €136.6 million generated over the first six months of the year, only the €36.3 million in sales during the months of May and June are included in the Group’s consolidated results. Without the hydrochloric acid incident, turnover for the months of May and June would have been about €48 million. 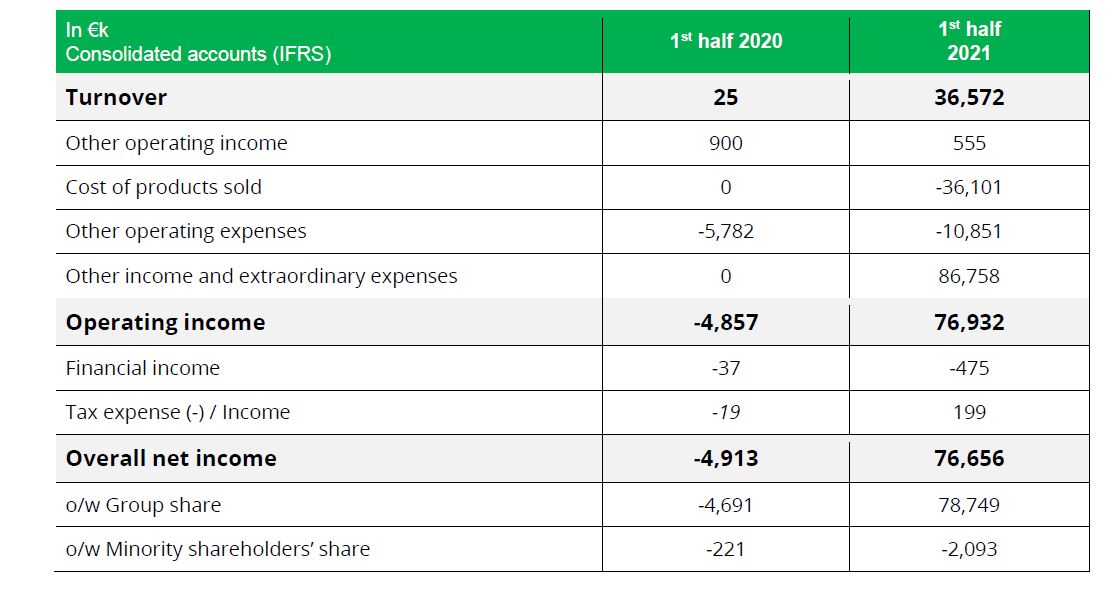 This turnover reflects a loss of €11.7 million resulting from an industrial incident during the second quarter. As previously reported, the Group estimates the total impact on sales for the year will be €20 million (of which €8.3 million during Q3 2021).

A negative impact of €8 million on the gross margin for the period resulted from:

In addition to these three elements related to the activities of METEX NØØVISTAGO are the start-up costs for METEX NØØVISTA at Carling, amounting to €3.2 million. The cost of products sold includes extraordinary expenses of €11.2 million. These impacted the gross margin, which would have been 35% without them.

Last, following revaluation of balance sheet items (“Purchase Price Allocation, PPA”), badwill amounting to €88 million was recorded for the acquisition of METEX NØØVISTAGO. This amount is the difference between the net asset value of AANE recalculated in the PPA (€101.2 million) and the purchase price of €13.2 million actually paid by METEX (€15 million less leakage of €1.8 million borne by the seller, AANE, between the signature of the sales contract and the closing of the transaction). Group net income was thus €76.6 million for the first half of 2021, compared with €–5.0 million for the year-earlier period.

A solid financial situation bolstered by the successful capital increase of €56.6 million

At 30 June 2021, Group gross cash flow (IFRS) was €13.8 million. The Group also held €16.0 million in financial investments recorded as current financial assets under IFRS standards. It received a subsidy of €9.6 million, including €2.4 million paid in the first half, to help finance the planned investment in a glycolic acid (GA) production plant in France.

Various loans and other financial debts granted to the Group brought gross debt to €24.3 million at 30 June 2021, compared with €14.8 million at end-December 2020, excluding METEX NØØVISTAGO. The Group notes that the portion due within less than one year is €3.5 million. As a result, at 30 June 2021, net cash flow, including the previously mentioned €16 million of financial assets, stood at €5.6 million.

Furthermore, after the first half ended, METabolic EXplorer increased its capital through a private placement for an amount of €56.6 million, including gross cash proceeds of €25.1 million, giving it additional financial resources to pursue its international development strategy.

PDO and BA shipments to resume in November

In the second half of 2021, the Group will be working to boost the output of METEX NØØVISTA, which began production in Q2 2021. As previously noted, to stabilize production and prepare for ramping up capacity, production at the Carling facility must be temporarily suspended. At this stage, work in collaboration with experts from METEX NØØVISTAGO has been carried out as planned. Production will start up again the week of 4 October and stabilize by the end of October, with product shipments resuming in mid-November 2021.

The METEX and METEX NØØVISTAGO engineering teams have of course been focused on resolving the incident involving the hydrochloric acid leak and setting up support for the NØØVISTA plant. They are now beginning studies on industrial-scale production of glycolic acid with the aim of making an investment decision in Q2 2022 (site selection, engineering studies, validation of the commercial offer, etc.).

A 2021 consolidated turnover target of more than €170 million

At this stage, the Group is still forecasting consolidated turnover of more than €170 million for the financial year ending 31 December 2021. In fact, the upward price trend for amino acids, and in particular lysine, is allowing the Group to maintain its revenue forecast for 2021.

EBITDA for the Group is likely to go down slightly. Although breakeven was forecast, a decrease to about €–4 million is now expected, reflecting a gap between sales and maintenance costs related to the stabilization plan for the Carling plant.

[1] The financial statements for the first half of 2021 were approved by the Board of Directors on 29 September 2021. The half-year financial report will be available on the company’s website after the end of trading on 30 September. 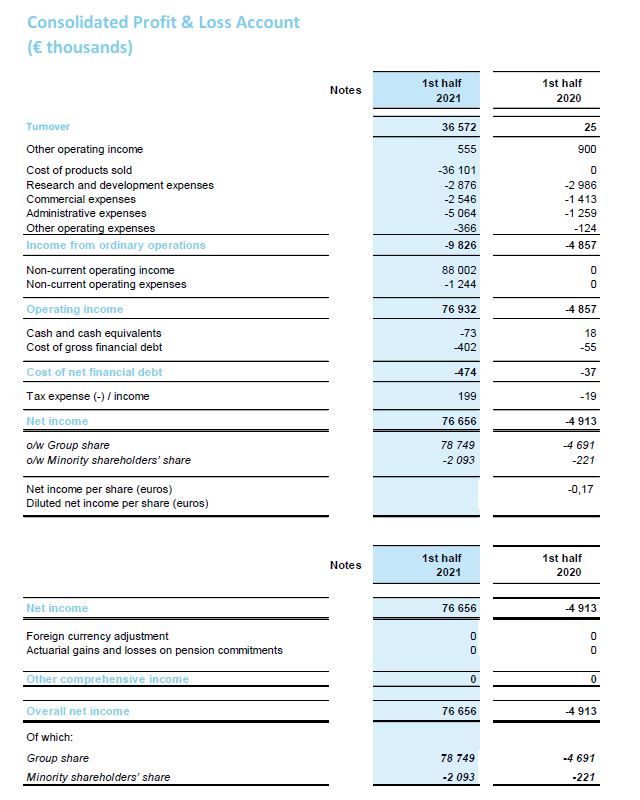 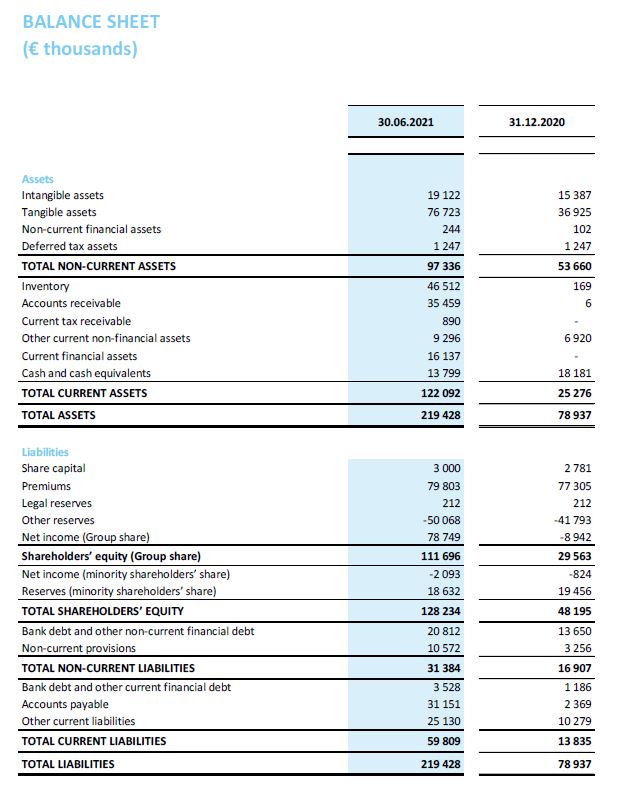