2020 – results in line with METabolic EXplorer’s industrial and commercial transformation:

2021 – acceleration of this transformation:

Significant industrial, commercial and technological progress achieved in 2020 despite the health crisis

The Group recalls that METEX NØØVISTA is a joint venture between METEX as the majority partner and the Société de Projets Industriels fund[1], managed by Bpifrance, which will initially produce and sell 5,000 tonnes of PDO for the cosmetics and biobased polymers markets and 1,000 tonnes of BA for the animal nutrition and aromas and fragrances markets.

From March 2020, construction work at the site to build the Group’s first production unit at the Chemesis site in Carling-St-Avold (Moselle department), was restricted due to the first lockdown. From June 2020, companies returned to work with their entire workforce, although productivity was impacted by the application of exceptional health and safety measures as a result of the health crisis. Work on the production unit then continued in line with the revised schedule, with a view to launching sales in the second quarter of 2021.

Pre-marketing and pre-sales activities continued in 2020 with the two commercial partners – DSM for PDO in cosmetics and ALINOVA for BA in animal nutrition.

In 2019, METEX NØØVISTA signed an exclusive and global strategic alliance with DSM, the world leader in the personal care ingredients market, for sale of the first non-GMO cosmetic-grade PDO. September 2020 saw DSM’s commercial launch to its international customers of TILAMAR® PDO with NØØVISTATM, a multifunctional ingredient with proven performance as a solvent, humectant and preservation booster for all cosmetic applications, which has also been awarded the “microbiome-friendly” label by a third party. A thousand samples of TILAMAR® PDO with NØØVISTATM, from several batches produced in the METabolic EXplorer demo plant, were prepared for dispatch to DSM’s international customers wanting to test the product and validate its performance in existing formulations or in the development of new products.

On 2 March 2020, METEX NØØVISTA announced a commercial agreement with ALINOVA, a company affiliated with the AXEREAL group (a leading French grain cooperative), for sale of the first butyric acid (BA) of natural origin on the French animal nutrition market. This collaboration combines the scientific expertise and coverage of the ALINOVA network with the expertise of METEX in the production of functional ingredients by fermentation. The two parties are currently working together on pre-marketing development of butyric acid derivatives.

The Group pursued its accelerated research & development programme in 2020 within ALTANØØVTM. The programme’s goal is to significantly shorten development times for fermentation processes applied to the market in functional ingredients of natural origin.

The Group intends to rapidly position itself in this attractive market and is particularly targeting the cosmetics, animal nutrition/health and biopolymers markets, valued at €16 billion[2] in total, with the objective of enabling the industrialisation of one new process a year from 2021. The first functional ingredient to enter the demo plant was glycolic acid (GA).

Information about the 2020 annual results 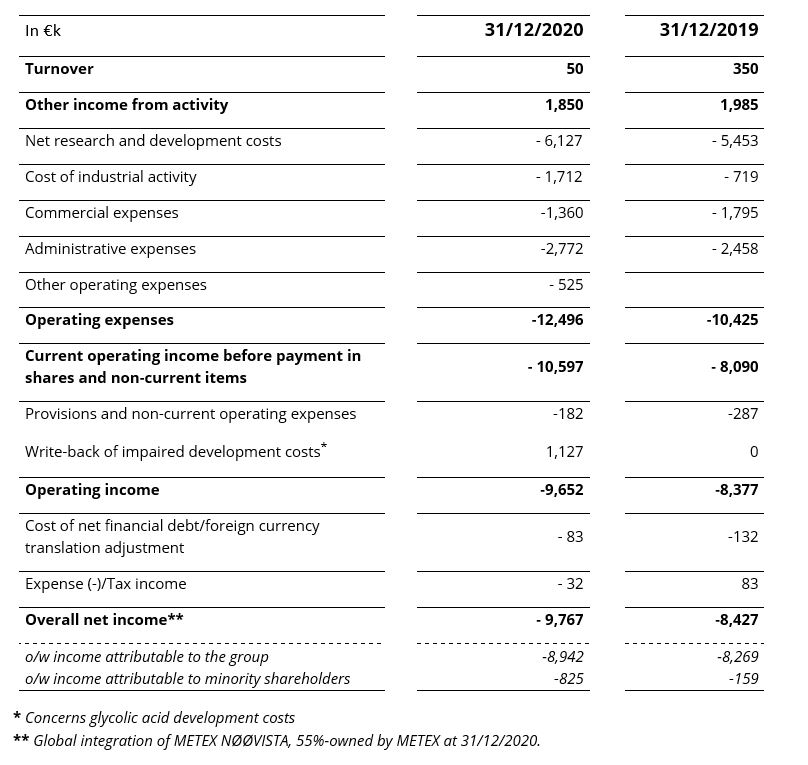 Given the Group’s strategic development plan, based primarily on industrialisation and marketing of 1.3 propanediol (PDO) and butyric acid (BA) as well as expansion of its product portfolio via its ALTANØØVTM technology platform, METabolic EXplorer specifies that its turnover is not a relevant indicator of activity at this stage. It amounted to €50,000 at the end of December 2020, corresponding to the income received under the non-exclusive licence option signed with UPM following postponement of development of the MPG process

The Group also specifies that the payment of €1.9 million relating to its Research Tax Credit (CIR) receivable for 2019, which was expected in the fourth quarter of 2020, was finally paid in January 2021.

Again with a view to making its cash-flow as secure as possible, the Group negotiated an Innov+ loan for its METEX NØØVISTA subsidiary for the amount of €5 million with Banque Populaire and Caisse d´Epargne. The money was paid during the first quarter of 2021. This loan provides new financing for the ramp-up of the plant and helps to largely offset the excess construction costs due to the health crisis, amounts which are nevertheless insignificant compared with the initial budget.

On 10 February 2021, the Group announced that it had obtained a €9.6 million grant to support its investment project in an industrial glycolic acid (GA) production unit in France. That aid was part of mechanisms put in place by the government to support investment in the transformation of agro-resources and the bio-production of essential industrial inputs, two strategic axes of the government’s industrial stimulus policy.

At the end of the BSA exercise period expiring on 19 March 2021, the Group announced that nearly 93% of the BSAs granted in 2020 had been exercised by shareholders, resulting in a capital increase, including issue premium, of €2,768,916.64.

On 26 January 2021, the Group’s Board of Directors had previously recorded the definitive acquisition of 464,836 free shares (out of 800,000 initial shares) by beneficiaries of the 2017 bonus share allocation plan, as at the acquisition date on 31 December 2020.

Mechanical construction of the production unit was completed at the end of 2020. The water testing phase has been completed, allowing the launch of the production start-up process in March 2021. Sales are set to begin, as planned, in the second quarter of 2021.

In preparation for start-up of the unit, teams have gradually been created over the course of 2020 and the first quarter of 2021. At the end of March 2021, the entity now has 45 jobs created in the heart of a territory undergoing industrial conversion.

This METEX NØØVISTA start-up is therefore the first step in the industrial and commercial development of METabolic EXplorer’s historical R&D activities.

In December 2020, METEX announced that it had obtained the first samples of biobased glycolic acid (GA), at demo plant scale, intended primarily for the cosmetics market, having the impact on the accounts of activating €0.1 million in development costs and reversing the provision for depreciation of €1.1 million recorded in the accounts in 2012.

GA is a reference anti-ageing active ingredient used in cosmetics and is also a precursor of PLGA (poly lactic-co-glycolic acid), a biodegradable polymer used in medical applications. METEX’s glycolic acid of natural origin will be the first natural alternative to existing petrochemical processes.

This first glycolic acid of natural origin expands METEX’s portfolio with a new process at pre-industrial maturity for a premium product in a market in search of naturalness. The characterisation of this first GA of natural origin will particularly allow finalisation of the process for manufacturing batches which, in the first half of 2021, will be used to provide samples to market players wanting to substitute the main active ingredient of petrochemical origin in their formulas with GA of natural origin.

The developments to be carried out on the GA project in 2021 have a dual objective: a decision to industrialise the technology at the end of 2021 to address the cosmetics market and the preparation of industrial partnerships to address polymer applications primarily for the high value-added medical sector.

METEX emphasises that the other technologies in the ALTANØØVTM portfolio under development relate in particular to amino acids intended for animal nutrition.

On 26 February 2021, as part of an undertaking to purchase, METabolic EXplorer entered into an exclusive negotiation agreement with Ajinomoto Co., Inc., with a view to acquiring its European subsidiary Ajinomoto Animal Nutrition Europe (AANE), the European leader in the production of amino acids by fermentation for animal nutrition.

The new METEX group (including its subsidiary METEX NØØVISTA and AANE) would have 450 employees with an annual production capacity of over 100,000 tons at the AANE site in Amiens for amino acids and 6,000 tons at the Carling-St-Avold site for PDO and BA. The new METEX group would incorporate the Group’s historical R&D and pre-industrial demonstration expertise upstream and, downstream, the industrial infrastructure, sales force and distribution networks of AANE and METEX NØØVISTA, creating the leading European player for the production by fermentation of functional ingredients of natural origin.

The AANE acquisition project received a favourable opinion from METEX’s Social and Economic Committee and is expected to be finalised in the coming weeks.

In view of the likely timetable for the integration of AANE into METEX, the Group has decided to postpone its Combined General Meeting to 28 June 2021.

[1] The SPI fund manages investments for both the Programme d’Investissements d’Avenir and the European Investment Bank.

[3] The PGE is an exceptional measure providing government guarantees to support bank financing for companies affected by the Covid-19 crisis.