Clermont-Ferrand, 30 March 2020 – (FR0004177046 METEX), a cleantech biochemical company that develops and industrialises competitive and sustainable fermentation processes offering alternatives to petrochemistry for the production and marketing of functional ingredients, publishes its audited consolidated financial statements for the 2019 financial year.

A year highlighted by the Group’s industrial and commercial transformation

In the 2019 financial year, METabolic EXplorer focused on two key areas of development:

With its financial partner, the SPI[1] fund managed by Bpifrance (a minority shareholder in METEX NØØVISTA), the Group is currently building a PDO/BA production plant on the Chemesis platform in Carling St-Avold (Moselle). The groundbreaking ceremony took place on 18 July 2019. Construction work is proceeding on schedule and on budget, with an initial objective of starting production in the second half of 2020. As a reminder, this unit, which will produce 6kt (5kt of PDO and 1kt of BA) in a first phase of operations, will create around 50 direct jobs in Moselle. The cosmetics and bio-sourced polymer markets will be targeted with the PDO and the markets of animal nutrition and aromas and fragrances with the BA.

In December 2019, METEX NØØVISTA also announced an exclusive global strategic alliance with DSM, a major player in the personal care industry, to market the first non-GMO cosmetic-grade PDO made in France. This alliance secures the sales plan of METEX NØØVISTA on the cosmetics market and should also enable it to achieve operational profitability twelve months after the first sales.

With METEX NØØVISTA, METabolic EXplorer is thus adding an industrial and marketing arm to its long-standing R&D activity, with the operation of the PDO/BA production plant generating recurring revenue.

The Group intends to quickly establish itself on this attractive market, targeting in particular the cosmetics, animal health/nutrition, and human nutrition sectors. The first functional ingredient put into the demonstrator is glycolic acid (GA). GA is a leading anti-ageing active ingredient used in cosmetics and also a precursor of PLGA (poly lactic-co-glycolic acid), a biodegradable polymer used in medical applications. METEX’s bio-based glycolic acid will be the first natural alternative to existing petrochemical processes.

A year in line with the roadmap

During its meeting on 27 March 2020, the Board of Directors approved the financial statements for the period ended 31 December 2019. 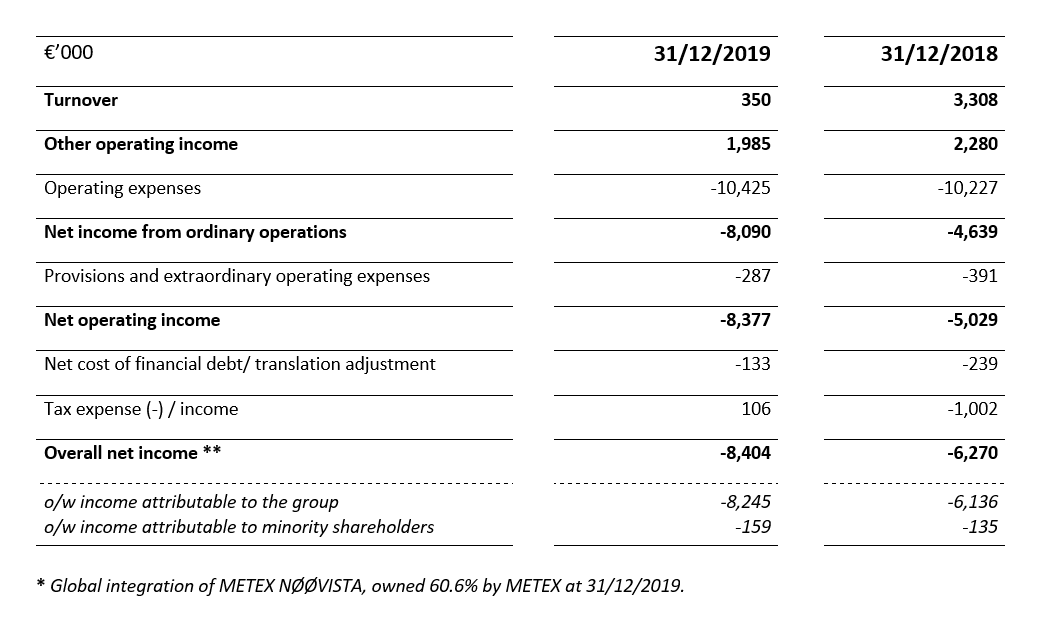 At end-December 2019, METabolic EXplorer reported annual income of €350,000, consisting of:

Given the company’s strategic development plan based, as a priority, on the industrialization and marketing of 1,3 propanediol (PDO) and butyric acid (AB) as well as the expansion of its product portfolio via its new technology platform ALTANØØV, the company points out that, at this stage, its turnover does not constitute a relevant metric of the company’s business or value.

Over the financial year and in accordance with its expectations, the overall net income of the Company thus stood at -€8.4 million against -€6.3 million at the end of 2018.

– contribution of €7 million by the SPI fund of Bpifrance to the METEX NØØVISTA subsidiary corresponding to the exercise of the second tranche of the investment agreement. As a reminder, this agreement between METEX and the SPI fund specifies a total contribution by both parties of €37 million, with the financing provided in three tranches as the work progress.

– receipt of investment grants and loans for the financing of the construction of its future PDO/BA production unit, for a total amount of €4.75 million;

– investments over the period for the construction of its PDO/BA plant, totaling €13 million at year-end; and

– annual cash outflow for the Group of €7.3 million over the financial year.

Recognition of the Group’s CSR approach

The Group is contributing to the transformation of the chemical industry with the aim of creating sustainable production methods that respect the environment and its consumers, and it is firmly committed to pursuing its environmental policy.

As such, in the 2019 GAIA INDEX overall ranking, METEX obtained an average general score of 68/100, thus moving up 23 places (77/230 in 2019 vs. 100/230 in 2018), and ranking fifth in the classification of companies with a turnover of less than €150 million. The Group has also obtained the Gold label awarded by ECOVADIS for its CSR commitment and performance for 2019. For this first assessment, METEX obtained the highest level of recognition.

Events after the end of the financial year

Ruling of the Douai Court of Appeals

On 23 January 2020, the Douai Court of Appeals overturned a 2017 ruling of the Lille commercial court requiring METabolic EXplorer to pay €2,820,000 in damages and interest to the plaintiffs in the lawsuit. (See Note 12 on page 22 of the annex of the half-year consolidated financial statements or page 37 of the 2019 half-year financial report.) The Court also dismissed the plaintiffs of all their other claims.

On 2 March 2020, METEX NØØVISTA announced a new agreement with ALINOVA (an affiliate of the AXEREAL group, France’s leading grain cooperative) for the marketing of the first bio-based butyric acid on the French animal nutrition market. This agreement will allow commercial development of butyric acid and its derivatives (sodium butyrate) to begin. These are multifunctional ingredients with proven and recognized benefits for animal growth and health.

Successful private placement for an amount of €7.3 million and free allocation of share subscription warrants (BSAs) to shareholders

On 14 February 2020, METabolic EXplorer announced a successful capital increase for an amount of 7.3 million euros through an offering addressed exclusively to qualified investors as well as a free allocation of share subscription warrants (bons de souscription d’actions – BSA) to all of its shareholders. The Private Placement has met with great success with qualified investors. Global demand amounted to € 9.94 million, an oversubscription rate of around 1.4 times.

The funds raised in the Private Placement will be used to accelerate the industrialisation of the processes developed at the ALTANØØVTM platform.

At its meeting on 27 March 2020, the Board of Directors stipulated that the documentation relating to the private placement transaction announced on 13 February 2020, erroneously indicated that the transaction was carried out on the basis of the 16th resolution of the Combined General Meeting of 27 June 2019 (offer intended exclusively for qualified investors), while in fact its characteristics corresponded more precisely to the delegation conferred under the 17th resolution of the same Combined General Meeting (offer reserved to categories of persons).

To respect the shareholders’ wishes, the Board of Directors therefore decided to change the legal basis of the transaction by making it the 17th resolution. This change has no other effect on the terms and conditions of the transaction.

With the substantial amount of financing thus raised, the Company’s financial position remains solid, giving METabolic EXplorer the means to achieve its ambitions.

In view of the current health crisis and the announcements by the French government on 16 March 2020, METabolic EXplorer announced on 17 March 2020 that, in order to respect the health and containment measures instituted in the country, it had put in place a continuity plan and decided to temporarily scale back its activities while preserving its tangible and intangible strategic assets. Restrictive measures necessary to protect its employees’ health and to allow a resumption of normal activity under optimal conditions have therefore been implemented, including teleworking to perform the tertiary functions at the company and provide the necessary support to its subsidiary METEX NØØVISTA.

Several subcontractors and suppliers involved in the construction of the METEX NØØVISTA production unit have notified the company that they have temporarily suspended their activities. At present, the site remains open, and some work is continuing with a limited number of people, with safety instructions to protect the personnel being scrupulously respected. The Group is preparing the implementation of measures to allow all work to resume under optimal conditions while minimizing the impact of this health crisis on the initial construction schedule.

In any case, the COVID-19 epidemic will have an impact on the Group’s activities and the 2020 outlook that it is impossible to quantify at this stage.

[1] Sociétés de Projets Industriels. The SPI investment fund is underwritten by the Programme d’Investissements d’Avenir and the European Investment Bank.