METabolic EXplorer in the 1st half of 2019

METabolic EXplorer in the 1st half of 2019

Clermont-Ferrand, 27 September 2019 – (FR0004177046 METEX), METabolic EXplorer (METEX), a biological chemistry company that develops and industrialises competitive and sustainable fermentation processes, publishes its first-half financial results on 30 June 2019 and reviews its activities in the first half of 2019.

During its meeting on 23 September 2019, the Board of Directors approved the consolidated financial statements for the period ended 30 June 2019. 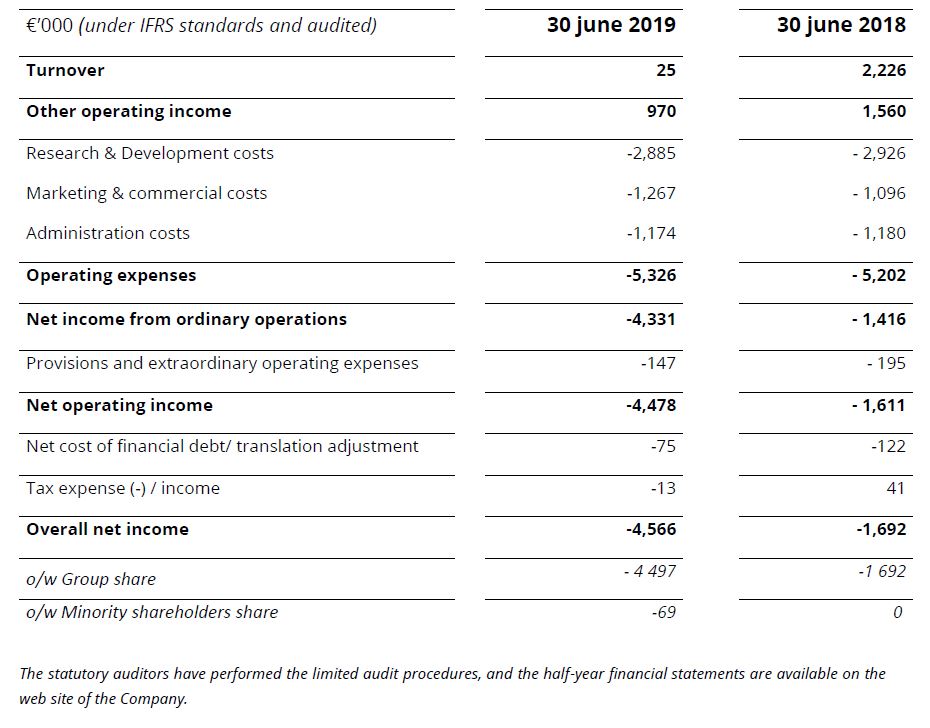 Given the company’s strategic development plan based, as a priority, on the industrialization and marketing of 1,3 propanediol (PDO) and butyric acid (AB) as well as the expansion of its product portfolio via its new technology platform ALTANØØV, the company points out that, at this stage, its turnover does not constitute a relevant metric of the company’s business or value.

In the first half of the year, METabolic EXplorer posted consolidated sales of €25,000 compared with €2.2 million at the end of the first six months of 2018. This amount, in line with anticipations, consists of revenues received under the non-exclusive license option signed with UPM following the decision to defer the development of the MPG process.

As of 30 June 2019, the Group’s consolidated gross cash position under IFRS standards stood at €27.9 million compared with €35.2 million at 31 December 2018. Current investments related to the construction of the METEX NØØVISTA production unit account for €3.7 million of this change. Net tangible assets of the Group thus rose from €5.7 million at end-December 2018 to €9.7 million at end-June 2019.

An industrial transformation and a boost for innovation

During the first few months of the 2019 fiscal year, METabolic EXplorer focused on two key areas of its development:

– The first one deals with its industrial transformation with the effective start-up of the construction of the PDO/BA production unit according to initial planning and for the start of the production scheduled in the second-half of 2020. The company reminds that, with its financial partner, the SPI fund managed by Bpifrance (a minority shareholder of METEX NØØVISTA), it is currently building a PDO/BA production plant on the Chemesis platform in Carling St-Avold (Moselle). This plant will create around 50 direct jobs in this area. The groundbreaking ceremony took place on 18 July 2019. In attendance were all local, public and private stakeholders who have made this project possible, including government representatives, the Greater East region, the Communauté d’Agglomération de Saint-Avold Synergie and Total Développement Régional.

Construction works on the PDO/BA plant are continuing in the second half of 2019, in line with the schedule. The teams are focused on referencing the PDO and the BA with prospects that have already been identified and on drawing up contracts for the global marketing of PDO and BA as soon as the unit begins operations.

– Alongside the development of METEX NØØVISTA, METabolic EXplorer mobilized, as announced, its R&D efforts around the creation of a new technological platform, ALTANØØVTM, which aims to shorten significantly the development cycles of its innovations. By capitalizing on its 20 years of experience in microorganism engineering, the company intends to quickly establish itself on the attractive market of functional ingredients of natural origin.

Initial developments on two amino acids have enabled encouraging results and thus METEX believes that it can reduce the development time of its fermentation processes to 12 to 24 months, compared to 4 to 8 years previously. These new ingredients of natural origin will target the cosmetics, animal health/nutrition and human nutrition markets, with one new product per year ready to be industrialised as of 2021.

The first functional ingredient put into METEX’s demonstrator is glycolic acid (GA), for which the company has already successfully completed several stages. GA is a reference anti-ageing active ingredient used in cosmetics and is also a precursor of PLGA (poly lactic-co-glycolic acid), a biodegradable polymer used in medical applications. METEX’s glycolic acid of natural origin will be the first natural alternative to existing petrochemical processes.

[1] Including €78,000 in non-current liabilities for leases stemming from the new regulation applicable as of 1 January 2019 on leasing contracts (IFRS 16).