An eventful 2018 for the Company

2018 was an important year for METEX. The Company confirmed the construction of its first production unit for PDO (1.3 propanediol) and BA (butyric acid). This substantial investment of over €45 million will enable the Company to market two high-value-added products with a view to capturing the maximum value stemming from the industrial development of innovations issuing from its research. As a reminder, the technology contributed by METEX is a solution that enables the production of two distinct products, PDO and BA, with a single process. The two products address several markets, primarily cosmetics and bio-sourced polymers (PDO) and animal nutrition and aromas and fragrances (BA).

During its meeting on 27 March 2019, the Board of Directors approved the financial statements for the period ended 31 December 2018. 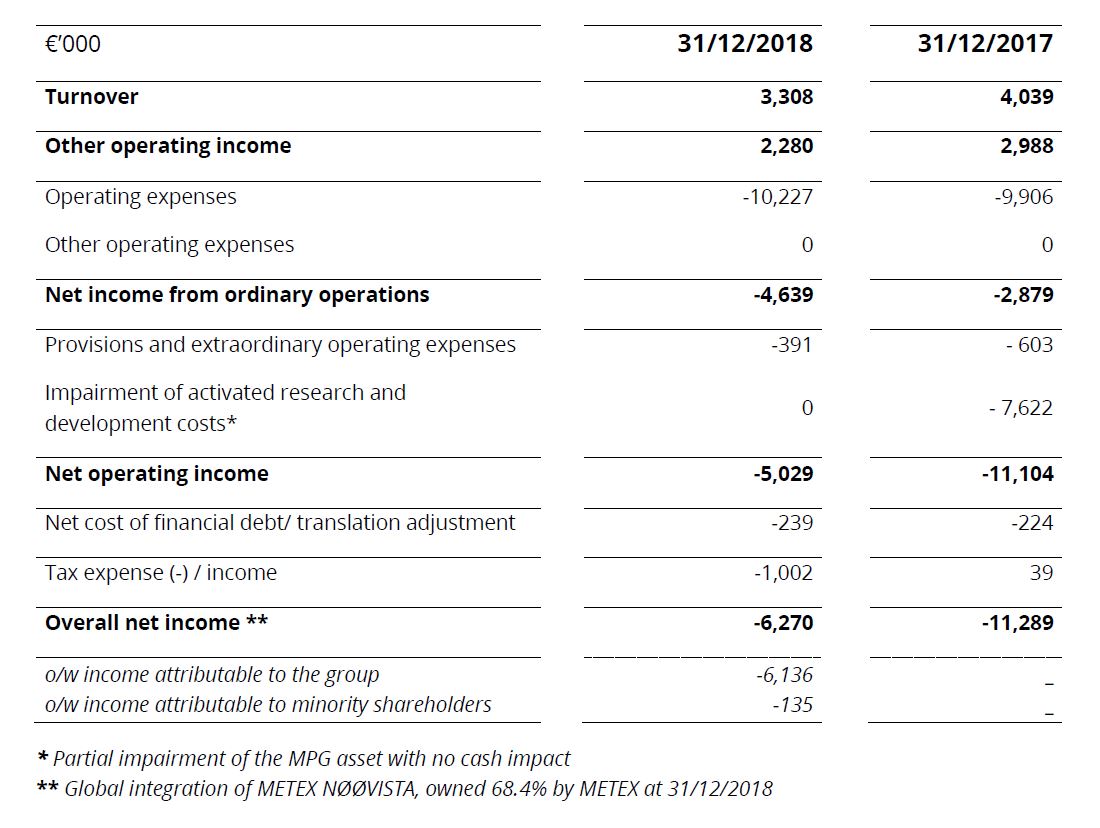 – income of nearly €1 million generated as part of the development agreement signed with partner UPM, aimed at developing an MPG production process from second-generation cellulosic sugars; and

– income of €2.3 million generated as part of the service provision contract signed with Evonik for a two-year period by the sale of the L-Methionine/inoLa™ technology in November 2016.

At 31 December 2018, operating expenses were stable at €10.2 million, compared with €9.9 million at end-2017. The slight increase resulted from costs relating to the Carling Saint-Avold construction site project (studies and legal fees) and to marketing fees regarding new products.

The Company’s current operating income for 2018 thus came out at -€5 million.  Factoring in the cost of financial debt and tax expenses, overall net income at end-December stood at -€6.3 million, including a loss of -€0.4 million for METEX NØØVISTA corresponding to the initial costs of the project start-up and a tax expense of -€1 million stemming from the restatement of deferred taxes.

– the contribution of €6 million by the SPI fund of Bpifrance to the METEX NØØVISTA subsidiary;

– the cash reintegration of an amount of €2.4 million, unavailable at the closing of FY 2017, through a release obtained in 2018; and

Company debt stands at €6.7 million, compared with €6.1 million at end-2017. The slight increase results from the payment of the balance of the Bpifrance reimbursable advance, of an amount of €0.75 million, acquired in 2015 as part of the industrial development of L-Methionine, and from the subscription of a €0.5 million loan to finance the recent investments in equipment for the R&D laboratories and the industrial demonstrator.

The Company’s financial situation is solid, with equity of €45 million and a cash position net of debt of €28.5 million, providing METabolic EXplorer with the means to achieve its new ambitions.

In 2019, METabolic EXplorer will remain focused on its industrial transformation with the effective start-up of the construction of the PDO/BA production unit before 30 June 2019, as provided for in the initial scheduling, and the unit due to be brought on line in second-half 2020. The teams are working hard on listing PDO and BA with prospects that have already been identified and on drawing up contracts for the global marketing of PDO and BA once the unit begins operations.

In parallel with the development of METEX NØØVISTA in 2018, METabolic EXplorer rallied its R&D efforts around the creation of a new technological platform, ALTANØØV, which will generate concrete benefits for industrials in the sector. METabolic EXplorer will be making regular updates on these new projects over the course of 2019.

A pioneer in industrial biochemistry with some 20 years of experience, METabolic Explorer (METEX) develops alternative solutions to the petrochemical processes used in manufacturing.

The company’s ambition with its biotechnological innovations is to produce consumer goods in a different way, without oil, in order to meet consumers’ new societal expectations and the objectives of the energy transition and sustainable development.

To create these innovative processes, METabolic EXplorer relies on a 70-person staff possessing the complementary competencies essential at every step of their development, from the optimization of biochemical catalysts in the laboratory to the industrial validation and production of samples in an industrial demonstration unit in continuous operation.

Based at the Clermont Limagne technology park, near Clermont-Ferrand, METabolic Explorer is listed on Euronext in Paris (Compartment C, METEX) and is included in the CAC Small Index.