METabolic EXplorer, Focus of the R&D resources towards the PDO/BA Carling project support

During its meeting on 23 March 2018, the Board of Directors approved the financial statements for the period ended 31 December 2017. 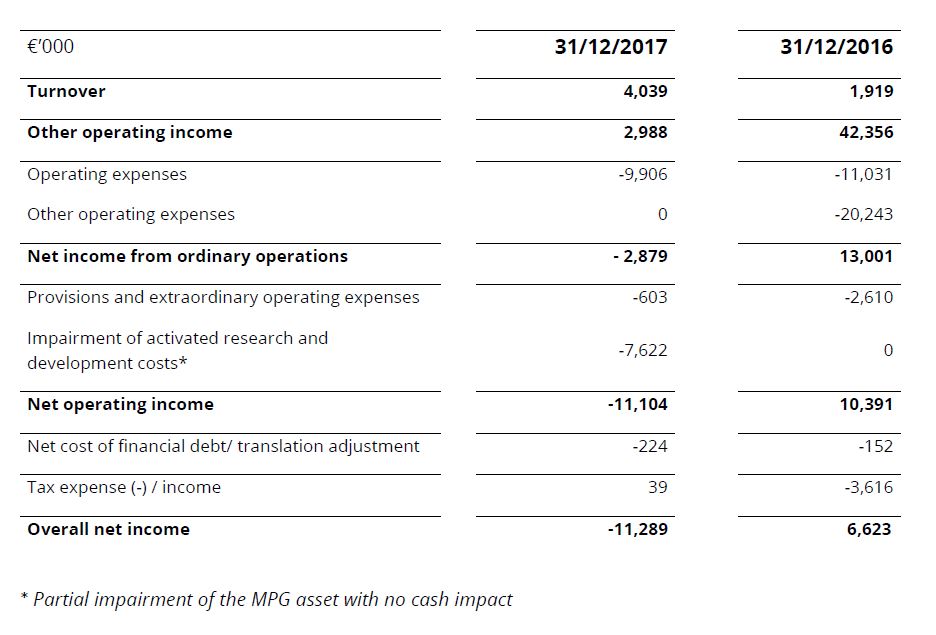 Highlights of the financial year:

In the first half of 2017, METabolic EXplorer presented its new strategic development plan. It is based on the industrial application of its most advanced process, which is to be achieved by launching a project to construct a plant for the production of 1.3-propanediol (PDO) and butyric acid (BA) with the aims:

In early 2018, the METEX Group confirmed the selection of the Carling Saint-Avold industrial site to set up its first unit. The Company also announced that it has signed a letter of intent with a financial partner to establish a joint venture for the construction and operation of this plant. This financial partner’s equity contribution is a maximum of €19.6 million, with a cash contribution from METEX, which will grant up to €17.3 million and an exclusive licence to the joint venture, with the possibility of sublicensing. This licence will be remunerated by a royalty fee on revenues in the vicinity of a mid-single-digit percentage along with an upfront licence fee paid in equity to make METEX the majority partner, with a 55% stake in the joint venture.

This investment, which is for the first stage of the project, is subject to the usual conditions precedent and to obtaining, before June 30, 2018, the last public financing aids needed to allow this petrochemical platform to welcome a first industrial biochemistry unit.

Following on from this strategy, the Group decided to allocate its resources as a priority to the successful industrialization and marketing of PDO/AB. As a result, and by mutual agreement with UPM, METEX decided to postpone the development of the project for production of MPG from second-generation wood cellulosic sugars. This agreed-upon deferment decision occurs in spite of METEX having achieved key performance criteria for MPG fermentation. METEX keeps full ownership of all its intellectual property rights with a non-exclusive license option to UPM. Finally, the impact of this joint decision on the Valchem consortium program is currently under review by the European BBI Joint Undertaking and by all consortium members.

At end-December 2017, the company posted annual turnover of €4.039 million consisting of:

As of 31 December 2017, operating expenses were €9.9 million, down from €11.0 million at the end of 2016. This decrease was due to additional costs related to the development of the InoLa™ process over the 2016 financial year and a decrease in expenses, related in particular to external services, of approximately -10% over 2017 compared with the previous financial year.

METEX recalls that a provision for a maximum of €6 million had been established in other operating expenses over the 2016 financial year for the contribution to be paid to Roquette Frères.

Direct expenses allocated to the Carling project for the 2017 financial year, including preliminary studies (preliminary engineering study, studies to compile administrative files, etc.), totalled €1.318 thousand with €572 thousand subsidized, bringing the amount of net expenses borne by the company for this project to €746 thousand.

Over the 2017 financial year, the company’s current operating income stood at -€2.9 million.

At the end of December 2017, operating income totalled -€11.3 million and included an impairment on MPG intangible assets recognized under IFRS for €7.6 million, bringing the value on the balance sheet to €2.7 million to take account of the prospects for delayed development. This decision has no impact for the Group in terms of cash flow.

– A non-recurring payment of €4.1 million corresponding to the contribution paid to Roquette Frères as part of the sale of the L-methionine/ inoLa™ technology, which was provisioned in the accounts at 31 December 2016

– A sum of €2.4 million made unavailable at the close of the financial year. METEX was sentenced to pay this sum in respect of damages and interest following a ruling from a court of first instance, which METEX has appealed. As this ruling was not subject to provisional execution, one of the claimants had a preventive seizure ordered on a METEX bank account. METEX immediately issued a writ of summons against the claimant to obtain the lifting of this seizure, which METEX considers as excessive

METabolic EXplorer points out that gross debt under IFRS standards (€6.1 million) takes account of the advances perceived and repayable in the event of success and of commercialisation, or €3.4 million. Cash at hand net of debt excluding repayable advances thus comes out at €28.6 million and METEX‘s cash at hand net of debt under IFRS standards amounted to €25.2 million (compared with €34.9 million as of 31 December 2016).

In 2018, the Group will continue to focus its efforts on accelerating its transformation. With the confirmation of the commitments of local, regional, national, and European stakeholders expected no later than 30 June 2018, estimated at around €15 million, the Group confirms that the first stone should be laid at the end of the third quarter of 2018.

A pioneer in industrial biochemistry with some 20 years of experience, METabolic Explorer (METEX) develops alternative solutions to the petrochemical processes used in manufacturing.

The company’s ambition with its biotechnological innovations is to produce consumer goods in a different way, without oil, in order to meet consumers’ new societal expectations and the objectives of the energy transition and sustainable development.

To create these innovative processes, METabolic EXplorer relies on a 70-person staff possessing the complementary competencies essential at every step of their development, from the optimization of biochemical catalysts in the laboratory to the industrial validation and production of samples in an industrial demonstration unit in continuous operation.

Based at the Clermont Limagne technology park, near Clermont-Ferrand, METabolic Explorer is listed on Euronext in Paris (Compartment C, METEX) and is included in the CAC Small Index.