METabolic EXplorer in the first half of 2017

METabolic EXplorer in the first half of 2017

Clermont-Ferrand, 29 September 2017 – METabolic EXplorer (METEX), an industrial biochemical company specialising in the development and industrial application of green and sustainable fermentation processes, publishes its first-half financial results on 30 June 2017 and reviews its activities in the first half of 2017.

During its meeting on 22 September 2017, the Board of Directors approved the financial statements for the period ended 30 June 2017. 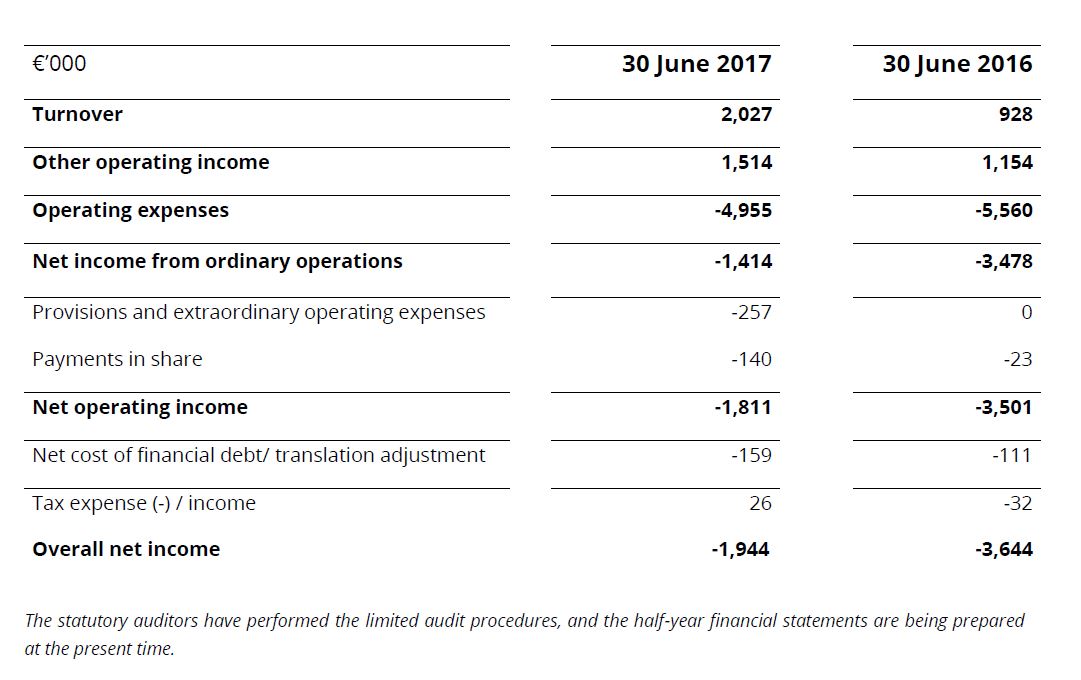 In the first half of the year, METabolic EXplorer posted net sales of nearly €2.0 million (compared with €0.9 million at the end of the first six months of 2016). These sales consist of:

At 30 June 2017, the company’s gross cash position under IFRS standards stood at €39.2 million (compared with €41.8 million at 31 December 2016), and the net cash position was €32.7 million (compared with €34.9 million at 31 December 2016). This amount includes a €0.5 million payment corresponding to a step grant received from Bio Based Industries Joint Undertaking (1) as part of the collaborative project “Valchem” for the MPG development process.

An amount of €1.5 million, corresponding to the refund of the research tax credit (CIR) minus the corporate tax payment due for fiscal year 2016, was received at the beginning of July and is not included in the cash position at 30 June 2017.

Project for the construction of a PDO/AB production plant

On 12 May, the Company presented its new strategic development plan. It is based on the industrial application of its most advanced process, which is to be achieved by launching a project to construct a plant for the production of propanediol (PDO) and butyric acid (BA).

During the first half of the year, METEX focused efforts on assessing the feasibility of constructing its own plant on an existing industrial site in France.

As announced in July, METEX signed an agreement with TOTAL Développement Régional (TDR) on 30 June 2017 for the preliminary engineering studies required to construct a PDO/BA production facility on TOTAL’s Carling Saint-Avold site in Moselle (Greater East Region). Under this agreement, METEX will carry out the studies for the construction and financing of a plant on the Carling site, while TOTAL will provide the necessary land and utilities on competitive terms as well as secure the support of all stakeholders for the revitalisation of the Carling/Saint-Avold platform.

The Company is now totally focused on this construction project, with the preliminary engineering studies and the arrangement of suitable financing now underway.

Benjamin Gonzalez, CEO of METEX, says: “We are now fully engaged in this project, in which numerous industrial, financial, and governmental entities are participating. There are indeed multiple issues involved, ranging from employment in the Lorrain region to the more general, current matters of our nation’s industrial renewal and investment in new technologies related to the energy transition and sustainable development. The reaction to our value proposition based on the disruptive technology of our PDO/BA process has been positive. TechnipFMC has begun the preliminary studies for the plant, giving us confidence we will be able to make the final decision on the investment in late 2017 or early 2018.”

During the first half, operating expenses decreased by €0.5 million, owing chiefly to reduced research and development spending in the MPG project. The amount of the research tax credit remained virtually unchanged over the period. The Company is also continuing the innovation programme it launched at the beginning of the year aimed at securing intellectual property rights for new products having applications in animal nutrition, cosmetics, and polymer chemistry.

(1) BBI-JU: a new, €3.7 billion public-private partnership between the European Union and the Bio-based Industries Consortium (BIC) aimed at increasing investment in the development of a sustainable bio-based industry sector in Europe.

A pioneer in industrial biochemistry with some 20 years of experience, METabolic EXplorer (METEX) develops alternative solutions to the petrochemical processes used in manufacturing.

Using renewable raw materials, it develops innovative industrial fermentation processes to produce chemical compounds used in basic products of everyday life such as animal nutrition and health additives, plastics, textiles, cosmetics, and resins, among many others.

The company’s ambition with its biotechnological innovations is to produce consumer goods in a different way, without oil, in order to meet environmental challenges and consumers’ new societal expectations.

To create these innovative processes, METabolic EXplorer relies on a 70-person staff possessing the complementary competencies essential at every step of their development, from the optimisation of strains in the laboratory to the pilot-scale production of samples.

Based at the Clermont Limagne technology park, on the outskirts of Clermont-Ferrand, METabolic Explorer  is listed on Euronext in Paris (Compartment C, METEX) and is included in the CAC Small Index.